If any of you have been to the old Environmental Foundation (Guarantee) Limited office, you know that it’s in the heart of Thimbirigasyaya. A hot and dusty spot, slap bang behind a petrol shed, and like all great petrol sheds, we are often welcomed with the aroma of fresh pressed petrol fumes every once in awhile.

Now the landlord of our building has two great passions. The first is rescuing cats, and like any great cat lover, he has rescued numerous cats, taken them to the vets for shots and fed them the fanciest tuna – unfortunately though, the last cat he brought ran away. That was pretty sad. It would have been nice to have an office mascot. The second is his avid interest in building things. His most prized project was his pond. A pond fringed with plants and a small rock wall. This gave our office driveway a nice eco-friendly feel.

This pond had many residents. Goldfish, cheap carp – I think there may have been some other fish in there at some point as well – but the pièce de résistance were the Butterfly Koi. Also known as Dragon Koi. 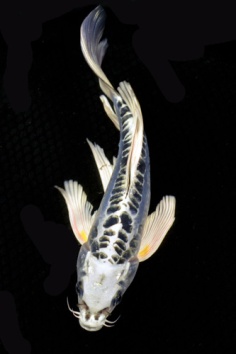 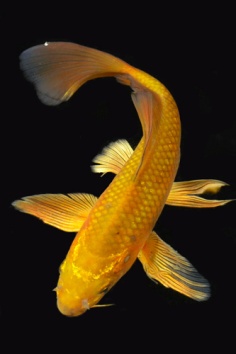 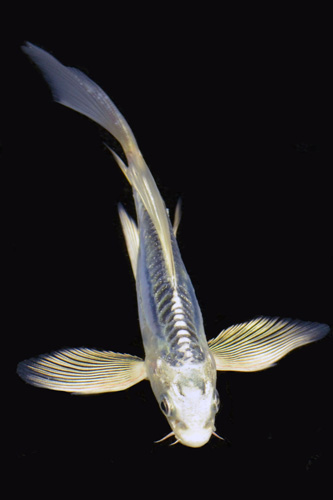 There were 10 large Dragon’s swimming lazily in the pond and our landlord was proud. It was a huge step up from the cheaper carp that’s for sure. But things took a sudden turn for the worse. They started going missing. Again. I say again for one simple reason. During the “goldfish phase” many of the fish went missing. However, since they were just goldfish no one really took much notice. Dragon’s on the other hand are expensive, and having them disappear into thin air was cause for concern. So without any hesitation, four security cameras were installed at varying heights and angles to catch the thief in the act.

It was the 16th of June 2015, and I was woken up by the incessant pinging of my phone. It was Gayani. Why she was sending messages at 6am was beyond me, so peering at my phone screen I saw about a bajillion exclamation marks, followed by a single photograph, captioned “Eshan (the landlord) will contact you”. I then scrolled down to see the picture she had sent next.

I would like to point out, that my job involves a lot of mind blowing moments. And this, unlike the others, blew the the lid off the teapot!

There on my phone screen, was a screen grab from one of the security cameras. It was focused at the pond. It was a black and white shot, of very high quality. You could see the pond and the ripples in the water, made by the startled and rather panic stricken fish. Sitting at the edge of the pond was the thief. Not a human. But an animal. And not just any animal. A fishing cat.

Numerous phone calls, 6 security cameras and two months of continuous filming later, I had secured permission to collar this cat. This gorgeous cat who I named Mizuchi. I thought the name Mizuchi was a great name for this fish stealing cat, since Mizuchi is one of the many Japanese dragons, found in or connected to an aquatic habitat. Fishing cats are strongly associated with water AND this cat was caught catching – drum roll please – DRAGON KOI!

I must admit I was quite proud of myself for this.

So now it was a matter of catching this cat, and I started planning right a way. I was already on the right track, since I was stocking the pond with cheap fish for weeks. He ended up being a very spoilt cat at the end of it all. After a few weeks of stocking the pond with cheap colourful carp, I decided to go the local route and switch to some good old Tilapia and Battas. That night with the flood lights on (we wanted to get some video in colour, and luckily for us Mizuchi was not the least bit bothered by the bright lights), Mizuchi snaked his way down the waterfall and took his seat at the edge of the pond. He watched the fish, tried to catch a couple, but Tilapi are fast fish, cunning, street smart. Mizuchi was a spoilt lazy brat at this point. He shook the water off the paw, gave the fish a miffed glare and sauntered back up the waterfall and along the wall, out of sight.

Watching the video footage the next day we were all amused by this cat’s antics. Like any creature that weasel its way into our hearts, he had me running around town looking for cheap, slow carp.

Our dance continued for a few weeks, and then one day it all just stopped.

It was the 15th of July – about 3 days without any sign of Mizuchi – when I got a call about a fishing cat that was captured by the Department of Wildlife Conservation down Elibank Road. It was stuck in a drain. As you can imagine I was extremely excited when I heard the news. I knew there had to be more cats in the area, but I had a feeling that the cat in question was Mizuchi. Luckily for me I was able to confirm this the next day. 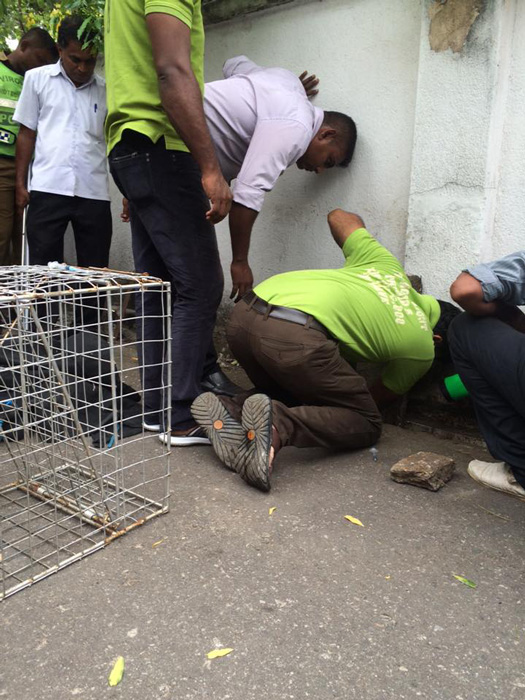 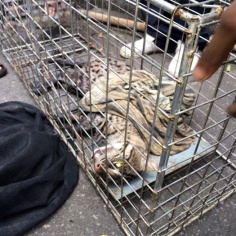 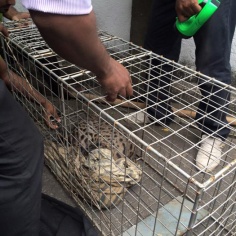 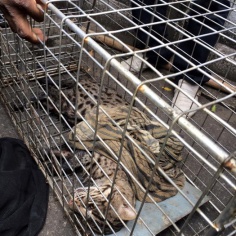 The Next Day, 1030hrs, Wildlife Department
We have tranquilised the cat, he has taken a few minutes to pass out, and the wildlife handler was just pulling him out of the trap cage. I was nervous. My heart was pounding. Could this really be him? He was thin, but feisty (when he was awake that is). The image of his stocky arm reaching out of the trap cage trying to grab our ankles as we stood next to him was fresh in my mind.

He was laid down on the ground in front of us, and flipped onto his right side, so that his left flank was exposed. That’s when I saw it. That wishbone on his shoulder. I had Mizuchi!

The collaring didn’t take long. We took his measurements and weight. His overall body condition, apart from him being dehydrated and underweight was good. His coat was beautiful, shiny greyish brown and thick, and his teeth! Oh those teeth! His canines were long, sharp and pearly white.

He was the perfect predator and he was going to tell me how he lived his life.