After nearly an year in the making, the Symposium on the Wild Cats of South Asia, Past and Present was underway. It was organised by the Wildlife and Nature Protection Society (WNPS), and was held between the 2nd and 3rd of November 2015.

The highlight and absolute privilege of the entire symposium (apart from the lectures) were the talks given by Professor. David MacDonald (keynote speaker) who spoke about the 7 Risk Factors of Conservation: Almondo’s Pact and the Journey to Evidence Based Conservation, and Professor Lars Werdelin who spoke about Paleobiology and the Evolution of Cats. 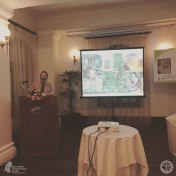 Session one was all about the cats of the past, aka paleobiogeography. It was chaired by Professor Lars, who as mentioned above, gave a fantastic account on how cats evolved, and where their evolutionary gaps lie. Dr. Kelum Medamendrarachchi was next, giving his lecture on the fossil remains found in Sri Lanka. These included tiger, lion (apparently a subspecies), a subspecies of elephant and hippo fossils.

Session two was on the big cats of South Asia, and was chaired by Dr. Andrew Kittle who is one of the founding members of the Wilderness and Wildlife Conservation Trust Sri Lanka (WWCT). Anjalie Watson (the other founding member of the WWCT) then spoke about the  Distribution and Resource Selection of an Endangered Apex Carnivore Across its Island Range – the Leopard (Panthera pardus kotiya) in Sri Lanka, highlighting the importance of habitat corridors and how leopards are distributed throughout the island. Dr. Meena Venkataraman was up next and spoke about her work on the Importance of Cultural Attitudes in Conservation: A Case of Human-lion Co-existence in Gir PA, Gujarat, which touched on the positive attitudes of Asiatic lions in Gir National Park in India. Dr. Kittle then wrapped up the session with his talks on The Influence of Intra-guild Competition on Leopard Ecology and Behaviour: A Case Study in Yala National Park, Block I, Sri Lanka and  Leopard Ecology in the Central Highlands of Sri Lanka. According to the last lecture, there are 13 leopards in Horton Plains, which is interesting… I say this because, at this point I was absolutely sick of leopards. I know, I know. Shun the non-leopard believer. But come on. Big cats are so last year!

The second day started with the session on the small cats of South Asia, and it was about time the little guys were brought to the spot light. Dr. Jim Sanderson who was the chair of this session, and gave a fantastic speech on why small cat conservation is as important as big cat conservation. Once that was done, Dr. Shomita Mukherjee gave her talk on the Assessment of the Distribution of Some Small Felids in India. It seems that there is a gap between certain populations in central india. For example, leopard cats can be found in the Eastern and Western regions of India, but not in Central India. It was then my turn to speak on Meso-carnivores as Urban Conservation Flagships: The Role of Fishing Cats in Sri Lanka’s Cities. Ashan Thudugala followed with his Story of Fishing cat Conservation in the Hill Country of Sri Lanka. Ashan has been successful in setting up road signs at fishing cat crossings, and has also started a fishing cat rehab facility in Anuradhapura. 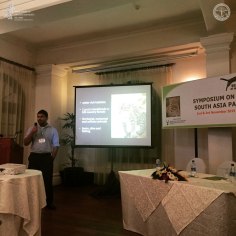 The session on the cats of Sri Lanka was next, and was chaired by Dr. Sriyanie Miththapala. The session began with Dr. Vijitha Perera’s talk on the Analysis of Mortality of Twenty Four Free Ranging Leopards (Panthera pardus kotiya) in Sri Lanka. I am a fan of necropsy, so this was an extremely interesting talk. Most of the leopards had been killed by people, either in vehicular accidents, or by being trapped in snares and later bludgeoned to death. There are two things in life that I love more than small cats and my dogs. And that is parasites and poop, so when Dr. Rupika Rajakaruna took the stand to talk about Gastrointestinal Parasites of Captive and Wild Cats of Sri Lanka, I snapped out of my leopard coma. Her findings showed that most of the cats in her study were infected by Moniezia which is a genus of tapeworm. Dr. Vijitha was then back with another serving of zoonotic diseases (yay!), with his talk on the Presence of Zoonotic Pathogens in Wild Cats in Sri Lanka. This was followed by WMS Botejue’s talk on the Records on Poaching of Leopards from the Northern Parts of Maduruoya National Park and Surrounding Areas (Dry Zone, Sri Lanka) During the Past Seven Years, and in this he mentioned how some people actively kill leopards for sport, just to see what it’s like. Anjali Watson was up next with her talk on the Mortality of the Sri Lankan Leopard Across its Island Range: Hotspots and Causes. The National Zoological Gardens Deputy Director, Dhammika Malasinghe then gave her talk on the Status of Captive Sri Lankan Wild Cats, which revealed that Sri Lanka has the second largest collection of captive rusty-spotted cats in the world. The Ex-situ Conservation of Sri Lanka’s Wild Cats with a Focus on the Leopard was then discussed by Frederic Houssaye, who is the studbook keeper for the Sri Lankan Leopard. It was a shame that he didn’t talk about any other wild cat found in Sri Lanka, as it would have been very interesting to know what the ex-situ practices were for the three other species. The symposium wrapped up with Chandika Jayaratne talking about his project on rusty-spotted cats, and his future plans to improve the rusty enclosures at the zoo. To drive this point in further, Fiona Fern gave the audience a very insightful look into the enclosures at the Port Lympne Wild Animal Park, in England.

All in all it was a very interesting symposium. I personally would have liked to hear more on the smaller cat species. It was a bit too leopard-centric for my taste, but I may be biased! 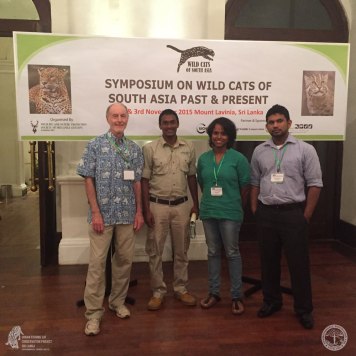